The importance of what benefits the students when watching live theater starts off by understanding the importance of studying literature in schools. Besides the classical, world known stories written by stage writers like William Shakespeare, theatre also translates great literature and fiction into stage performances. Reading stories isn’t just for entertainment purposes but it also have other benefits. Transform those fictional stories into stage performances and the results are ever more enhanced and long lasting.

Reading fictional stories, allows readers to feel emotions and experience through imagination, more than just what goes in our everyday life. As Paul Chiariello writes about the importance of literature, he says that he is convinced that fiction plays an incredibly important role in shaping society and character development. The first function being, that so discussions don’t get personal (Why Is Literature Important? The 3 Social Functions of Fiction). Rather than explaining what an idiot a friend is being taking the step he or she did, we can use a fictional character in a story to relate to and analyze without the hurt feelings. Another function is, that characters in literature are models for character (“Why Is Literature Important? The 3 Social Functions of Fiction”). Pinocchio’s nose grew after he lied, therefore lying is a very bad habit. Reading fictional stories also helps us understand others, as conscious beings, as people like ourselves (Why Is Literature Important? The 3 Social Functions of Fiction). Helps us experience other’s perspectives as if we are placed in their shoes for a moment to better understand their personality and emotions.

All these benefits as helpful as they are could be even more enhanced if readers actually saw the story being performed live in theater. Besides the entertainment part and the social connection with the party attending the theater, a live performance is not something just seen but rather more of an experience. There is something more to an audience watching real live acting, giving them a more personal experience and connection to the characters and the events unfolding on stage. The characters and their emotions are live, the stage and the scenery is a real construction and the colors are vivid. Live theater experience is even proved to be more beneficial than watching a classical novel in a cinematic film.

Studies have been specifically designed and carried out to find if students benefited and how, when they experienced a novel in a high-quality live theater performance as opposed to students who would have otherwise just read the same story in school or watched a cinematic version. One research study was a collaboration with TheaterSquared, an award-winning professional theater in Fayetteville, Arkansas. Results showed that students certainly benefited and in various ways when attending live theater performances. Students who experienced live productions had enhanced knowledge of the plot and better understanding of the vocabulary. Watching a plot live on stage enhances the memory of it and watching a live conversation on stage makes it easier for an audience to grasp on the vocabulary used in the productions as opposed to reading the works or watching film versions.

Students exposed to live theater, are more culturally enriched. Experiencing live theatre opens students to the diverse world populated with different people and ideas, making them more aware and accepting of those differences (“Learning from Live Theater”). Experiencing Huckleberry Finn’s growing bond and friendship with Jim, an African American slave on stage would mean a whole lot more and is more significant when seen in person rather then read about in a book or seen in a film.

Live theater also helped students to recognize the emotions of others (“Learning from Live Theater”). While an author can do a great job in conveying a character’s emotions through the written word, watching an actual human experiencing an emotion, whether is sadness, happiness or sudden surprise, an audience connects their own emotions to what is transpiring on stage making that emotion much more memorable and recognized then if it was simply read in a book or captured and condensed on a screen. The ability of better reading other’s emotions is a valuable skill for students to learn and apply through life.

Learning literature in schools does matter but exposing students to live theater performances, magnifies literature in significant ways and teaches even more valuable life lessons. Whether by inspiring students to participate in theater productions or experience them from the audience’ seat, students do more than just learn about literature by better memorizing plots. They enhance their vocabulary, built higher tolerance to others different then themselves and teaches them to recognize what other people are feeling or thinking. These results should help encourage schools to justify their reasons for exposing students to more live theatre performances especially through field trips and theater programs as learning should just happen within the classroom walls. 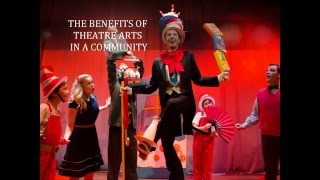 The Benefits of Theater Arts in a Community

Print is Not Dead

The Perception of the ‘Starving Artist’ is Obsolete